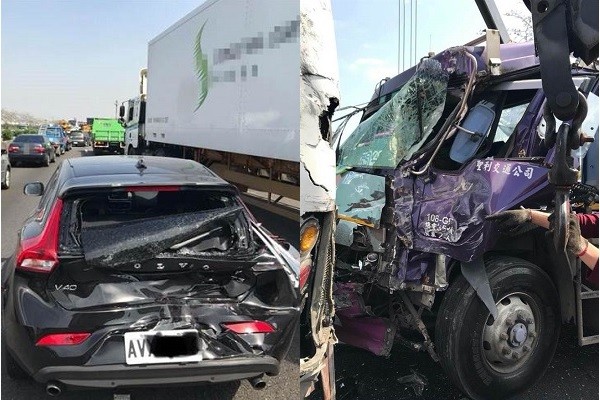 TAIPEI (Taiwan News) — Taiwanese netizens are thoroughly impressed by the durability of a Volvo, which after being caught in a multi-car pileup, only suffered minor damage to the rear, while a semi-trailer truck was totaled in the road wreck.

Images were posted yesterday (March 25) on the Facebook Group Baofei Gongshe (爆廢公社) of the aftermath of a multiple-vehicle collision from a few days ago on a highway in Taiwan in which a black Volvo hatchback was struck from behind by what netizens believed was a semi-trailer truck. The front of the heavy truck was completely mashed in while the Volvo only suffered comparatively minor damage to its bumper, trunk and rear windshield. However, closer inspection of the photos reveals that the truck likely struck a bus which can be seen to the left of the frame. Nevertheless, Taiwanese netizens praised the plucky hatchback for punching above its weight:

“Worthy to be called Volvo.”
“Although the Volvo was struck by the truck it came out on top.”
“It appears this car’s defenses are very strong.”
“Volvo, manufacturer of chariots.”
“Calling it the Swedish tank is no joke.”
“The people’s tank wins again.” How Volvo Electric Cars is Made I Volvo C40, XC40 Production...